Inspired creations, drawn from nature that transform metal into works of living art.

Polish born sculptor Walenty Pytel is unique amongst contemporary artists. He is internationally renowned as Europes leading metal sculptor of birds and beasts and is one of the worlds finest craftsmen. His inspired creations are drawn from nature and transform metal into works of living art.

Group tours are available to view some of the life and work of Walenty Pytel.  An internationally renowned artist who is recognised as a leading metal and bronze sculptor, Walenty’s studio is set amidst glorious Herefordshire countryside overlooking a lake.  It is from this setting that Walenty acquires some of his inspiration for birds and animals in the wild.

The tour will include:

The cost is £12 per person.  The gallery and studio tour will take about 2 hours.  Sculptures, both metal and bronze, limited edition prints, and cards can all be purchased from the gallery.

Overnight accommodation in Herefordshire can be arranged with booking if required.

There are over 20 sculptures to be viewed around the Herefordshire towns and countryside.

A brochure guide to these will be given to you during the gallery tour.

The considerable variety of designs and sizes of steel birds, beasts and murals, are the heart of the Pytel work. Whatever the size, each piece is individually created and formed in outstanding detail. On large commissions, a model is made first, and the final piece in a large construction may then take several months to complete. The Steels vary in size from large public commissions of up to 5m high to small table top models from 25cm in height.

A small number of bronzes are produced in traditional lost-wax method as limited editions. The work is first created in steel to impart the unique Pytel characteristics. They are generally small in size – from 15 – 70 cms in height.

The stories behind the sculptures

Over the years that Walenty has been sculpting, some interesting stories have emerged around the sculptures… Read some of the fascinating stories below.

During the millennium this sculpture of Swans was commissioned by Laing Homes when they converted the Old General Hospital into apartments.   However there is an interesting addition to this story many years prior when Walenty was still quite young, he ended up in the...
Read More

The 5 free standing, life-size Vikings and wall murals were commissioned for Royal Caribbean Cruise Liner – Grandeur of the Seas by the Finnish Shipbuilder Kvaekne Masa.  Launched on 1 March 1996 The Vikings were sited as Keeping Watch over the Signature Lounge atop...
Read More

So named because it is the Latin for Digger was commissioned by JCB as a feature outside their head office in Uttoxeter.  Walenty was given a lot of miniature diggers to break up to form the model of the sculpture; the main sculpture which was the largest sculpture in...
Read More

The sculptures and signed limited edition prints shown below are for sale at Walenty’s Gallery.  This is just a small sample of items for sale.  Please contact us below for further information or to make a purchase

Walenty studied at Hereford Art College for 5 years, obtaining the National Diploma of Design. After working for a commercial Art Studio in London he returned to his beloved rural surroundings and set up his own studios in Herefordshire. Shortly after this he had an accident and was in hospital for several months. To amuse the hospital staff he made many bird paper sculptures to adorn his bed, and this resulted in commissions for a more permanent medium. In the early stages his sculptures were made of sheet aluminium that resembled his early paper sculptures, he then progressed working with mild steel producing many abstract murals for the corporate world. Private commissions followed for the home and garden, so the bird and animal sculptures we see today were born.

From the mid-eighties when Walenty took on an agent, limited edition bronzes were then produced from some of the steel originals.

Walenty has been commissioned by Royalty, Public Bodies, Corporations, Members of Parliament and private collectors alike. Commissions have included J.C.B, Royal Caribbean Cruise Line, Bacardi, Bulmers and many others. 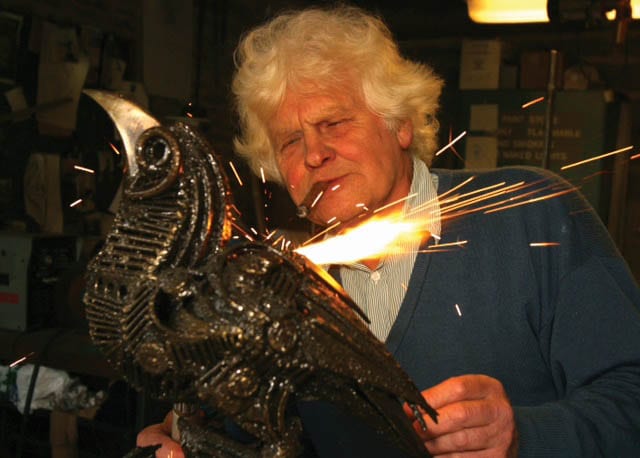 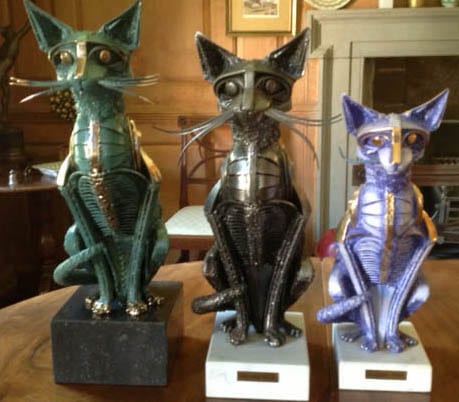 You can get in touch about Walenty’s work or enquire about Gallery Visits either by sending an e-mail or by telephone.